In Conversation with Ambassador Keith Harper

Promoting Human Rights in an Increasingly Challenging and Autocratic World 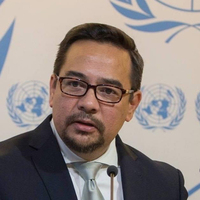 In Conversation with Ambassador Keith Harper, Moderated by Victoria Holt

Promoting Human Rights in an Increasingly Challenging and Autocratic World

Ambassador Keith M. Harper, a citizen of the Cherokee Nation, is the first Native American to be named a U.S. Ambassador, serving as U.S. Permanent Representative to the U.N. Human Rights Council from 2014 to 2017 based in Geneva, Switzerland.

Ambassador Harper is currently a Partner at the law firm of Jenner & Block and serves as a Senior Non-Resident Fellow at the George Washington University Elliott School of International Affairs, and the American Bar Association has appointed him as Special Advisor to the ABA’s Rule of Law Initiative.

Ambassador Harper served as a Chair for Native American policy in the 2008 “Obama For America” presidential campaign and subsequently on President Obama’s transition team. He was appointed by President Obama to the President’s Commission on White House Fellowships in 2010.

Co-sponsored by The John Sloan Dickey Center for International Understanding and the Department of Native American and Indigenous Studies. Made possible by a gift from Mary and Peter R. Dallman ’51.