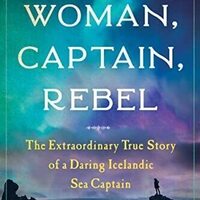 Woman, Captain, Rebel: The Extraordinary True Story of a Daring Icelandic Sea Captain tells the daring and magnificent historical nonfiction account of Iceland’s most famous female sea captain who constantly fights for women’s rights and equality – and who also solved one of the country’s most notorious robberies. Captain Thurídur, born in Iceland in 1777, lived a life that was both controversial and unconventional. Her first time fishing, on the open unprotected rowboats of her time, was at age 11. Soon after, she audaciously began wearing trousers. She later became an acclaimed fishing captain brilliant at weather-reading and seacraft and consistently brought in the largest catches. In the Arctic seas where drownings occurred with terrifying regularity, she never lost a single crewmember. Renowned for her acute powers of observation, she also solved a notorious crime. In this extremely unequal society, she used the courts to fight for justice for the abused, and in her sixties, embarked on perilous journeys over trackless mountains. Weaving together fastidious research and captivating prose, Margaret Willson reveals Captain Thurídur’s fascinating story, her extraordinary courage, intelligence, and personal integrity. Through adventure, oppression, joy, betrayal, and grief, Captain Thurídur speaks a universal voice. Here is a woman so ahead of her times she remains modern and inspirational today. Her story can now finally be told.

Margaret Willson is a cultural anthropologist whose current research interests focus on issues relating to Arctic and Northern concerns, including fisheries, gender and small-scale communities. She is affiliate associate professor of anthropology and Canadian studies at the University of Washington. Her previous books include Seawomen of Iceland: Survival on the Edge and Dance Lest We All Fall Down: Breaking Cycles of Poverty in Brazil and Beyond.

Sponsored by the Institute of Arctic Studies at the John Sloan Dickey Center for International Understanding and the Stefansson Arctic Institute of Iceland. Book signing hosted by Still North Books and Bar of Hanover.