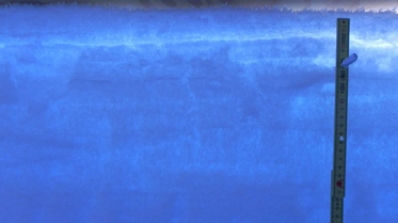 Research by Dartmouth Thayer School of Engineering graduate student Kaitlin Keegan has added critical information to a NASA annoucement today regarding melting of the Greenland Ice Sheet. "According to satellite data, an estimated 97 percent of the ice sheet surface thawed at some point in mid-July," according to the NASA release.

Keegan is an engineerig PhD student and a fellow in the Dartmouth IGERT polar enviromental change program. She studies the physical properties of the top layers of the ice, the firn, at Summit as well as NEEM, an international ice core project in Northwest Greenland. According to Keegan, the last time such a melt occurred at Summit was in 1889.

The 2012 Summit firn melt layer. The white layer at about 2cm depth shows the new melt layer formed from the mid-July warm temperatures. The inhomogeneity of the layer is due to the surface topography of the ice.

"I have been focused on the melt layers present in both firn cores [Summit and NEEM] because they occur very infrequently," Kaitlin wrote on the Dartmouth IGERT bloga few days after a run of unusually warm weather created the remarkable opportunity to watch the melt occurring. "At Summit, there is only one other melt layer besides the melt layer from this past week and this previous melt layer dates to 1889."

Keegan and Mary Albert, a professor of engineering at Thayer and Executive Director of the NSF Ice Core Drilling office, are working on a paper on the topic.

"I have been studying melt layers in Greenland firn for the past three years, and thanks to the NSF's IGERT program I am now in Greenland as the new melt layer forms. It's really exciting to witness the melt layer formation in process in real time," said Keegan. She happened to be at Summit participating in NSF's Joint Science Education Project (JSEP) with high school students from Greenland, Denmark, and the US and was able to observe the melt.