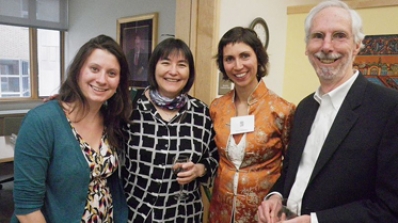 At the recent meeting of the University of the Arctic (UArctic) Board of Governors at the Dickey Center for International Understanding, outgoing Board Chair Dr Barry Scherr, Dartmouth's Mandel Family Professor of Russia (UArctic Board Chair 2009-2013) and Dr Andrew Greenshaw from the University of Alberta (Board Vice-chair 2007-2011) were honored for their service.

“Both Barry Scherr and Andrew Greenshaw have provided UArctic with enthusiastic and strong leadership over the past six years, steering the organization through a period of strong growth” says UArctic President, Lars Kullerud. Further adding that “as Board Officers, both accepted their responsibilities and passionately took on the challenges the network has faced”. Most notably, their contributions to the development and implementation of UArctic’s current Strategic Plan (2009-2013), as well as their involvement in developing the next UArctic Strategic Plan 2020 will be remembered for years to come.

During three days of meetings at the Dickey Center, UArctic Board members, who arrived from all eight circumpolar nations (the Russia Federation, Canada, Finland, Iceland, Sweden, Norway, Greenland/Denmark, and the US/Alaska) had a chance to meet and talk to IGERT graduate students and faculty about their polar research in Greenland and Antarctica.

On March 19, Tove Søvndahl Pedersen, Director of Greenland Government in Copenhagen and a member of the UArctic Board of Governors, gave a public lecture about the challenges Greenland faces in deciding how to safely exploit their considerable natural resources. She also commented on the recent elections in Greenland. [A YouTube link to her presentation will be available soon.]

UArctic Board Members and others in attendance: