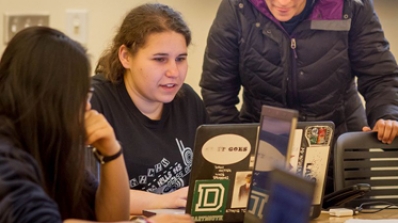 One of five Dartmouth students and recent graduates selected as highly commended in the 2013 Undergraduate Awards, sponsored by the Government of Ireland, was literature major Grace Afsari-Mamagani ’13, who during 2010-2013 was an editor of World Outlook, a student international affairs journal published by the Dickey Center.

Undergraduate Awards is an international academic awards program that invites students from top universities around the world to submit their theses or research work. Afsari-Mamagani's senior thesis examined the way authors Zadie Smith and jennifer Egan use digital platforms such as text messaging, Twitter, email and PowerPoint in their work and the extent to which literary sincerity is maintained through what she calls "cyborg fiction."

Grace is currently pursuing a Master's degree in English and American Literature with a focus on digital humanities at New York University.