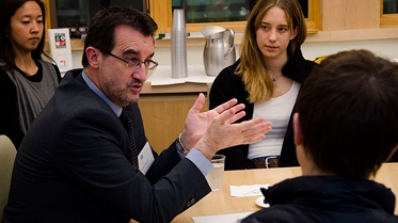 The Dickey Center has had ongoing contacts and programs with Kosovo, including a visit by Ferid Agani, the Kosovo Minister of Health in 2013.

The Dickey Center is a Dartmouth partner with three other universities in a USAID-funded project to train a new generation of Kosovar leaders to drive significant change in economic, political, and social areas.

The five-year, $30 million grant is administered through World Learning, an international nonprofit organization that supports education, exchange, and development programs in more than 60 countries.

“Dartmouth is one of our closest partners in international development,” said Donald Steinberg, president and CEO of World Learning, while speaking on February 28 at the Dickey Center.