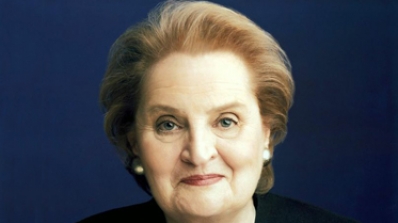 Telling tales from her diplomatic career, former U.S. Secretary of State Madeleine Albright yesterday enthralled and entertained Dartmouth students and later a capacity crowd of 900 in Spaulding Auditorium. The first female Secretary of State, Albright served in President Bill Clinton’s administration from 1997 to 2001. She shared her thoughts on crises ranging from the Ukraine to Syria, and gave insights into her personal diplomatic tactics, which included sending signals to foreign leaders with her jewelry.