Michael Morell, a 30-year veteran of the Central Intelligence Agency, most recently as deputy director, will be in residence at the John Sloan Dickey Center for International Understanding from Monday, September 29, through Thursday, October 2. 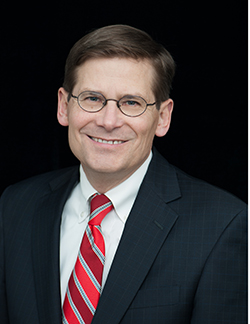 Michael Morell is a 30-year veteran of the CIA. (Beacon Global Strategies)

Now a CBS News analyst and senior counselor at Beacon Global Strategies, Morell will join Daniel Benjamin, the Norman E. McCulloch Jr. Director of the John Sloan Dickey Center for International Understanding, for a discussion at a public event on Tuesday, September 30, at 4:30 p.m. in Cook Auditorium at the Murdough Center.

Morell’s visit to Dartmouth is a reunion of sorts for the two former government officials. During his time as the State Department’s coordinator for counterterrorism, Daniel Benjamin worked frequently with Morell.

“I probably saw Michael Morell at least two or three times a week across the table in the White House Situation Room, where we joined with colleagues from around the government to set policy on Pakistan, Yemen, Somalia, and any number of other issues,” Benjamin says.

“In a pretty impressive crowd, Michael was always one of the most brilliant and capable individuals present. His contribution to the policy process—not to mention running the CIA—was absolutely essential to many of the Administration’s successes. We’re very fortunate that he is coming to Hanover.”

The public event is part of a residency almost a week in length. During his time at the Dickey Center, Morell will also participate in classroom discussions and meet with faculty, staff, and student groups.

As CIA deputy director from May 2010 until August 2013, Morell was one of the leaders in the search for Osama bin Laden and participated in the deliberations that led to the May 2011 raid that killed bin Laden.

Earlier in his career, Morell served as President George W. Bush’s intelligence briefer and was executive assistant to then CIA Director George Tenet. He also served as acting director twice, most recently for four months before the appointment of current CIA Director John Brennan in March 2013.

In their conversation at the public event on Sept. 30, Morell and Benjamin will touch on many of today's most pressing international issues. The Islamic State in Iraq and Syria (ISIS), Vladimir Putin, NSA surveillance, tensions in the South China Sea, drone warfare, and Iran’s nuclear ambitions are among the topics that will be considered. At the conclusion, there will be a question-and answer-session with the audience.