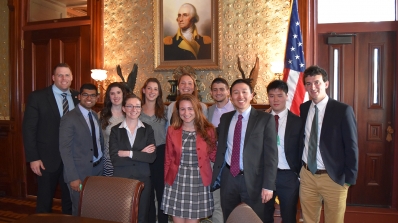 The Islamophobic Huckster in the White House

The following story, written by Dickey Center Director Daniel Benjamin and Stephen Simon, a professor at Amherst College, appeared in The New York Times on February 24, 2017.

The Islamophobic Huckster in the White House

The new point man for the Trump administration’s counter-jihadist team is Sebastian Gorka, an itinerant instructor in the doctrine of irregular warfare and former national security editor at Breitbart. Stephen K. Bannon and Stephen Miller, the chief commissars of the Trump White House, have framed Islam as an enemy ideology and predicted a historic clash of civilizations. Mr. Gorka, who has been appointed deputy assistant to the president, is the expert they have empowered to translate their prediction into national strategy.

Mr. Gorka was born and raised in Britain, the son of Hungarian émigrés. As a political consultant in post-Communist Hungary, he acquired a doctorate and involved himself with ultranationalist politics. He later moved to the United States and became a citizen five years ago, while building a career moderating military seminars and establishing a reputation as an ill-informed Islamophobe. (He has responded to such claims by stating that he has read the Quran in translation.)

In 2015, he caught Donald Trump’s eye, perhaps appealing to someone who had no government experience by declaring everything done by the government to be idiotic. Most notably, Mr. Gorka derides the notion that Islamic militancy might reflect worldly grievances, like poor governance, repression, poverty and war. “This is the famous approach that says it is all so nuanced and complicated,” Mr. Gorka recently told The Washington Post. “This is what I completely jettison.”

For him, the violence emanates from the “martial language” of the Quran, which has hard-wired aggression into Islam. Like the recently fired national security adviser Michael T. Flynn and Mr. Bannon and Mr. Miller, the architects of the ill-conceived executive order barring the entry of citizens of seven Muslim-majority countries, Mr. Gorka sees Islam as the problem, rather than the uses to which Islam has been put by violent extremists. The contrast between them and the policy makers of the previous three presidential administrations could not be clearer: For their predecessors, the key has been to fight terrorists, not assault an Abrahamic religion.

The gist of Mr. Gorka’s worldview is that the United States is locked in an ideological conflict with “radical Islam.” A report he wrote with his wife assesses that “it is the key failing of U.S. efforts to fight terrorism that we have not understood the importance of ideology.” He attributes this failure to a “systematic subversion of the national security establishment under the banner of inclusivity, cultural awareness and political correctness.”

This is a supremely uninformed and ahistoric claim, as evidence demonstrates. Consider the raft of recently declassified United States government assessments of Islamic militancy going back nearly 40 years. The C.I.A. has produced in-depth analyses of Sunni radicalization dating to 1979, when Wahhabi messianists seized the Grand Mosque in Mecca.

In the mid-1980s, the intelligence community published and disseminated widely a major, detailed assessment of Islamist trends. The recent death of Omar Abdel Rahman, the sheikh who proffered divine approval for the first attempt to destroy the twin towers in 1993, is a reminder that the intimate ideological and religious sponsorship of Islamic militancy was on the United States’ radar for nearly a decade before Sept. 11. There were few national security professionals somnolent enough not to appreciate the salience of the jihadist threat after 1993, and the 1998 attacks on American embassies in Africa. But for those few, Sept. 11, 2001, was the ultimate wake-up call.

After Sept. 11, the American government, its allies, the academy and myriad journalists undertook to dissect the phenomenon of radicalization, explore its pathways, unpack Quranic language on violence and understand the sociology of Islamic terrorism. The suggestion that Mr. Gorka brings new insight is self-gratifying, grandiose malarkey.

What emerged from these decades of engagement with jihadism was a nascent counterterrorism strategy. That was scuttled when the United States took a sharp wrong turn with the invasion of Iraq, a misstep that was a profound boon to extremists. But even so, counterterrorism strategy has evolved into a sustainable program of counter-radicalization and targeted military operations. Mr. Gorka seems oblivious to this legacy. For him, a huge effort that gathered momentum decades ago somehow amounts to “downplaying the seriousness of the threat.”

What has been learned during this long effort from law enforcement, intelligence community analyses and an abundance of scholarship on jihadists is that religious doctrine is not their sole or even primary driver. The issues that Mr. Gorka so defiantly “jettisons” actually do play a role.

Declaring a religious war now would only validate the jihadist narrative and force fence-sitters to procure AK-47s. Having elevated a huckster weak on jihadist history and doctrine and unaware of what his own government has learned over decades, the Trump administration now risks exacerbating the very security challenges it hopes to surmount. H. R. McMaster, the newly appointed national security adviser — a strong choice — will quickly have to exorcise Mr. Bannon and Mr. Miller’s worldview if the administration is to forge a sound national security policy. Getting rid of Mr. Gorka should be an early priority.

Steven Simon, a professor at Amherst College, served on the National Security Council in the Clinton and Obama administrations. Daniel Benjamin, the director of the Dickey Center for International Understanding at Dartmouth College, was the State Department’s counterterrorism coordinator from 2009 to 2012. They are the authors of “The Age of Sacred Terror: Radical Islam’s War Against America.”