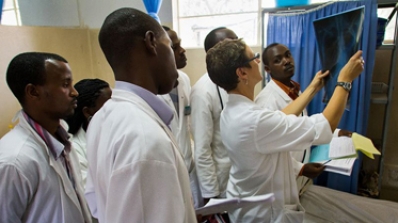 Hanover — Global health leaders grappled with the irony of gathering at Dartmouth College to discuss the urgent situations faced by some of the poorest populations in the world.

How, attendees of the Leila and Melville Straus 1960 Family Symposium asked, could health care providers surmount barriers of privilege and racism by learning from the errors of a global health regime that went hand-in-hand with imperialism? The day-long event on Wednesday, titled “Global Health in an Era of De-Globalization,” offered no easy answers.

In fact, the roots of the global health movement are inextricably linked to imperialism itself, said Nils Daulaire, a distinguished visiting scholar in global health at the Harvard T.H. Chan School of Public Health and senior fellow at the Harvard Global Health Institute who participated in one of the symposium’s panel discussions.

“It was the thought that we can fix them by making them more like us. In these cases, we are sadly reminded of the use of biological warfare as a means of essentially clearing the land,” he said, adding that these initiatives were geared less toward ensuring the good health of indigenous populations and more toward streamlining the empire’s systematic extraction of resources from the land and its people.

Daulaire, who previously led the Upper Valley-based Global Health Council and served as an assistant secretary for global affairs at the U.S. Department of Health and Human Services during the Obama administration, said the era of imperialism in global health peaked along with the British empire in the late 19th and early 20th centuries.

But the effects of imperialism are not confined to its heyday, said Richard Horton, editor-in-chief of the British medical journal The Lancet.

“Imperialism isn’t over. It isn’t some relic of the past. It’s just been re-invented in different forms,” he said, adding that giving the phenomenon a name — “neo-imperialism” — is one way for leaders to hold themselves accountable for continuing to operate under paternalistic frameworks of care.

The consequences of neo-imperialism in global health are prevalent even in the Arctic region, where some of the wealthiest countries still struggle to provide adequate care to its indigenous, largely low-income communities, said Susan Chatwood, executive and scientific director of the Institute for Circumpolar Health Research.

“There is tremendous loss of culture, loss of livelihood, loss of traditional diet and sources of nutrition — and, as a result, we’ve seen an explosion in rates of substance abuse, suicide and non-communicable disease,” such as heart disease, Chatwood said.

Michelle Morse, the founding co-director of the nonprofit organization EqualHealth, said she also saw this in her work with cholera patients in Haiti. The cholera epidemic originated with the arrival of United Nations troops from Nepal, who came to Haiti to help restore political stability after President Jean-Bertrand Aristide was deposed in 2004. Though Morse commended the good intent of the U.N. workers, she said that the fact that they were asymptomatic carriers of cholera resulted in the loss of some 10,000 Haitian lives in the eight years she spent working there.

In those eight years, she said, not once was the specter of racism addressed — something she said she would like to see changed in future generations of global health leaders.

“So much of what you see in global health initiatives is people in the U.S., who are not people of color, going to places where there are people of color, and not bringing that structural analysis of why they need to be there in the first place, or thinking about their own prejudices,” she said. “Not to say that they are racists — just that racism is built into all of our structures in America, because that is our history.”

This racism can often manifest itself toward populations that are more vulnerable to transmittable disease, said Martin Cetron, director of global migration and quarantine at the federal Centers for Disease Control and Prevention, citing the Ebola and Zika epidemics.

“Human migration as a driver for moving pathogens around the globe is as old as human history itself,” he explained. “What’s changed is the vehicle.”

Cetron said that in the cases of Ebola and Zika, “the epidemic of fear and stigma is much larger than the epidemic of disease as we experience it.” The solution, he said, lies not in “the mythical idea that by closing borders, globalization no longer exists,” but in finding a balance between “civil liberties and protective measures.”

Vanessa Kerry, CEO of the health education nonprofit Seed Global Health, also discussed the problem of “siloing” in global health initiatives — when organizations focus on issues as if they are stand-alone, rather than part of a complex, interconnected system with a unified vision of health as a fundamental human right.

“Believe it or not, we are all motivated by the same thing,” said Kerry. “We all want to know that our children will have access to education, and that we’ll have a roof over our heads.”

Kerry, who is a daughter of former Secretary of State John Kerry, also said that the Trump administration has ushered in a new era of uncertainty about the future of global health.

“No one understands where our feet are going to land at this point,” she said. “While we cannot sacrifice the fundamental principles and values of what we are fighting for ... We can change how we communicate about it, and be opportunistic about how we can leverage that across barriers. But I think that there is a path forward.”