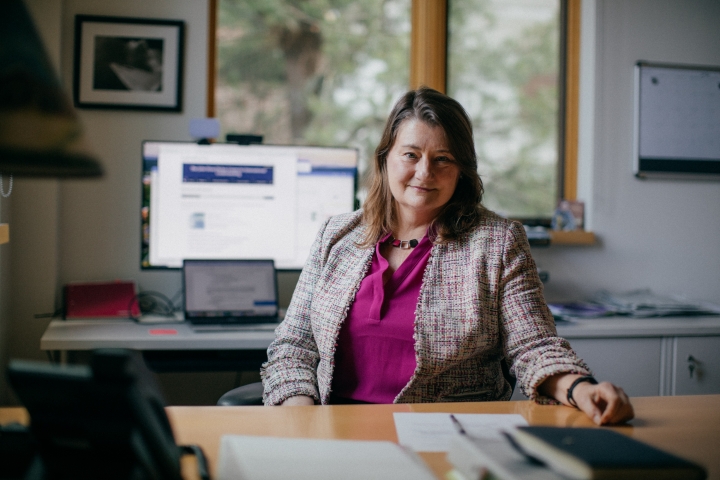 Victoria K. Holt, the Norman E. McCulloch Jr. Director of the John Sloan Dickey Center for International Understanding, is a former deputy assistant secretary of state for international security in the Obama administration. She has worked in the areas of diplomacy, peacekeeping, multilateral affairs, and atrocity prevention for the State Department, international policy think tanks, and the United Nations. She spoke to Dartmouth News on Wednesday as Russia was beginning its invasion of Ukraine.

First, what would you like to say in the wake of Russia’s attack on Ukraine?

Victoria Holt: Russia’s actions are indefensible, and a direct challenge to all nations who believe in national sovereignty and the rule of law, as well as a threat to the people of Ukraine who will bear the brunt of this attack.

How has Russia attempted to justify its invasion of Ukraine?

Holt: Russia set up a series of false arguments as grounds for its military intervention there. (Russian President Vladimir) Putin gave a very long speech in which he laid out quite a set of grievances. Essentially he said he wants to roll back history to an earlier time and reassert Russia’s territorial claims over Ukraine’s territory. And this is looking backwards, not forward. That argument does not make sense.

It is really interesting that of all the countries on the (U.N.) Security Council, the country that responded the most vigorously to this argument, was Kenya. Kenya’s ambassador to the U.N., Martin Kimani, said, “recolonization is not the goal today.” He called out Russia for wanting to reimpose old colonial lines.

And he had the support of the other African nations on this. So this is not just an argument between the U.S. and Russia, or even just with Europe. You’re seeing other countries stand up in opposition.

The second argument is that Ukraine was seeking nuclear weapons. Ukraine is actually one of a few countries in the world to give up nuclear weapons voluntarily. So that makes no sense.

A third argument is that Russia is acting to protect the civilians of the two breakaways, the parts of Ukraine where Russia has backed separatist forces. Putin has claimed that the pro-Russian separatists are themselves under attack or could even face genocide at the hands of Ukraine.

Again, there appears to be no basis for claims of a threat from Ukraine. There has been violence in these regions. There has been, between injury and deaths, roughly, I think it’s 10,000 since Russia went in. And another 3 million currently are in need of humanitarian assistance from the ongoing conflict in those areas that Russia puts claims on, but that is seen, in part, as a result of Russia’s backing of the separatist forces.

Leading up to the invasion, how has the international community responded to Putin’s claims?

Holt: I think that the broader argument here is that we have devices to, in a diplomatic way, address genuine political concerns. There has been a long-term effort, called the Minsk Agreements, to address issues of sovereignty and disputes in the region, which have basically been pushed aside. There have been multiple Security Council meetings calling for political dialogue and diplomacy to solve these problems. Even China called out Russia for that—they argued that Ukraine should be solved through a political process. And the Security Council had a briefing this week and the General Assembly was meeting today (Wednesday). So there are mechanisms to address concerns. Russia has pushed all those aside.

Why is Ukraine so important to Putin that he’s willing to attack despite unified opposition from the world community?

Holt: Well that’s a great question, and understanding Putin’s thinking is a subject of great debate. So while I can’t lay any claim to understanding his logic, influence over Ukraine has been seen by some nationalists as Russia’s historic destiny. One set of arguments is that the West’s increase of NATO’s reach is seen as a threat. NATO is meant as an alliance of countries that are prepared to defend each other’s territory. Ukraine is a partner, but not a member. It’s in a relationship that could lead to it joining NATO. NATO nations have supported training of its forces. NATO has actually encouraged Ukraine’s work on protection of its own civilians, but it’s still not a full member. Russia and Putin may see that as a threat to its long-term interests.

Could Ukraine step back from joining NATO as a way of diffusing this situation?

Holt: That’s their decision, isn’t it? One of the best, clearest lines after World War II is that nations should control their own borders, that borders change through peaceful negotiation, not by conflict and war—territorial integrity and sovereignty in broad terms. So I think that’s a decision for them, and they approached NATO.

The urgent question now is what happens to Ukraine’s civilian population as well as to the country itself.

As the conflict escalates, we have to keep in mind the people who are fleeing. This may cause a challenge with refugees in the region, in Europe. And how many civilians will be harmed within Ukraine is unknown, but there’s already an expectation of a growing humanitarian crisis. The world community will face questions of how to help those people in need, whether they’re under direct attack or they need to leave where they’re living.

It is also a reminder to all of us in the West, but also beyond, that the rule of law and the systems of democracy and national self-determination are being challenged. It’s a wakeup call to us that these systems of international diplomacy and respect for national sovereignty need our attention and strengthening, including from countries like the United States. Rather than take them for granted, to invest in them, because otherwise they will not be strong enough to withstand when countries break these rules and disrespect sovereign borders.

Do you worry that this could become a land war in Europe?

Holt: I don’t have a crystal ball, but I certainly worry. Again, it gets to Russia’s intentions and I’m not more privy to that than you are. It’s a big gamble. So Putin must think it’s going to pay off.

Can sanctions still be effective?

Holt: Yes. Sanctions can be effective. Sanctions are best when they’re multilateral, meaning the Security Council imposes them. But that won’t happen because Russia has a veto on the Security Council. So instead we see countries in Europe, the United States, and beyond, agree to share sanctions so that it’s multinational. That can be effective in reducing financial flows, limiting arms, trying to end human rights abuse by individuals. Actions like ending the Nord Stream 2 energy pipeline can have a powerful effect. But sanctions usually mean pain on both sides.

And under something called the Magnitsky Act, the United States can impose sanctions on individuals. We have already imposed sanctions on Russian oligarchs in a number of cases as a way of creating internal political pressure on Putin to step back.

The idea is, “follow the money,” the link of money and policy and power. But that money is not just in Russia, obviously, it’s all over the world. It impacts banks, it impacts real estate, it impacts countries. So that’s part of the question: are the countries imposing sanctions willing to bear the pain those moves will have at home?

It is interesting the oligarchs and the most powerful in Putin’s Russia like to put their money in the West, because the Western nations are more stable. They find more benefit from open democratic societies.