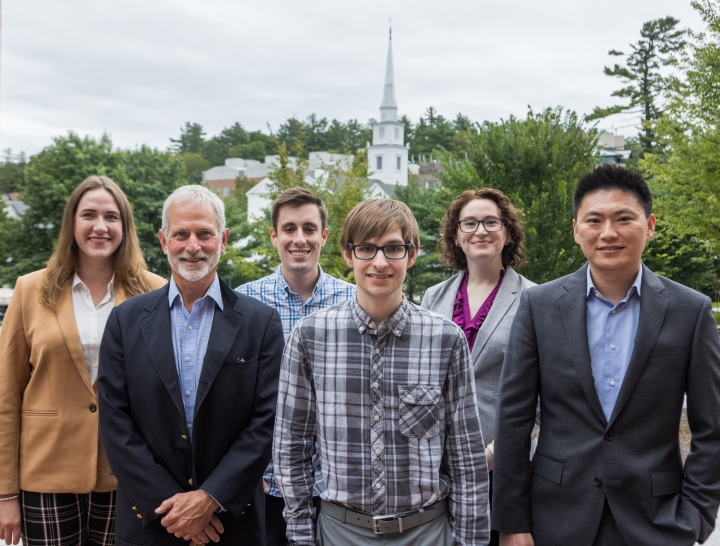 As the first cohort of Rosenwald postdoctoral fellows arrived at Dartmouth in September, the U.S. had just pulled out of Afghanistan. Now, as their residencies conclude, the Russian invasion of Ukraine continues.

Faculty at the John Sloan Dickey Center for International Understanding have been prominently engaged with these crises, presenting the postdocs with a powerful model of public scholarship, says William Wohlforth, Daniel Webster Professor of Government and faculty director of the Dartmouth Initiative for Global Security at the Dickey Center.

“If you create a postdoc that is tailored toward supporting policy-relevant research, you are creating an incentive for scholars to think about their work in this way,” says Wohlforth.

“As part of the Rosenwald program, we have media training sessions, communications training sessions, how to write op-eds. These are all meant to help these younger scholars articulate what they’re doing in a manner that can be understood by people outside of academia.”

Although this is the first year of the Rosenwald Fellows program, Dickey has sponsored a postdoctoral fellows program for 10 years, and more than 70 scholars and leaders in U.S. foreign policy and international security are still very much involved in networking and engaging with the Dickey fellows each year, says Wohlforth.

We have such good models here at the Dickey Center for how to do this productive engagement because everybody connected to the center is a really accomplished scholar.

Rosenwald Fellow Alexandra Chinchilla, who is also the 2021-22 Karen TU’89 and Joseph Niehaus 1985 Postdoctoral Fellow, says she learned a lot watching her faculty mentor, Jason Lyall, the James Wright Chair in Transnational Studies, analyze the war in Afghanistan in public forums and in the media.

“We have such good models here at the Dickey Center for how to do this productive engagement because everybody connected to the center is a really accomplished scholar, and they really care about the public-facing aspects of our work,” says Chinchilla, a political scientist whose research examines how great powers use training and advising to directly shape the militaries of states and armed nonstate actors.

“That’s what I’ve been trying to model this year as I’m starting to interact with media to write my first opinion piece,” she says, pointing to her piece, “Security Assistance Worked in Ukraine,” posted in The Defense Post and on the Initiative for Global Security’s Crisis in Ukraine webpage.

“Ukraine shows how U.S. and NATO efforts to train local partners pay off when they mirror local priorities,” Chinchilla writes in the op-ed.

Rosenwald Fellow Hannah Waits, who is also the 2021-22 Cindy and David Edelson 1981 Postdoctoral Fellow, is a historian specializing in transnational politics, race, sex, and religion from the mid-20th century to the present. Waits says Dickey training on working with journalists and nongovernmental organizations helped her build relationships and think about different ways to engage on issues.

“Having more of an advising role seems very attractive to me. Consulting for museums, for example, is a different kind of public-facing leveraging of scholarly work,” says Waits, who consulted with the New York Historical Society during her fellowship on the exhibit “Acts of Faith: Religion in the American West.”

Working with her faculty mentor, history professor Bethany Moreton, who specializes in transnational religious networks, religion and politics in the U.S., and the politics of sexuality and race, has helped her expand her thinking about ways to engage her scholarship, she says.

The fellowships also provide the freedom and time to all the postdocs to complete a book-length manuscript in their field of study. That is what attracted postdoc Kevin Li, a historian who specializes in the history of modern Vietnam with particular interest in nationalism, decolonization, state-formation, and civil war.

When he accepted the Rosenwald Fellowship at Dartmouth, he thought it would simply give him a chance to think deeply about his research “in the middle of nowhere.”

But meeting and joining in discussions with other scholars in broadly diverse fields and working with faculty mentor Associate Professor of History Edward Miller, whose research and teaching focus on modern Vietnam, the Vietnam War, and oral history, showed Li the value of public scholarship.

“Given my experience here at Dartmouth, I’m more open to opining in more general interest outlets than I would have been last year,” says Li. “And given the context of the South China Sea, the U.S. role in the Asia Pacific, and China’s growing shadow over the region, I think I would be willing to dip my toe in that world.”

In May, the five postdoctoral fellows from the 2021-2022 class will travel to Washington for a conference on U.S. foreign policy and international security involving policymakers, academics, and policy leaders, including many Dartmouth and Dickey program alumni. The current cohort also includes Michael Masterson, whose work focuses on the intersection of international conflict and political psychology with an area focus on China; and Gregory Smith, who studies changes in the causal effect of coercive policy tools and domestic determinants of U.S. foreign policy.

The Dickey Center’s postdoctoral fellows program, piloted in 2012, was endowed, expanded, and renamed in May 2021 in honor of John Rosenwald Jr. ’52, Tuck ’53, chair emeritus of the Dartmouth Board of Trustees, with the goal of strengthening the Dickey Center’s role in preparing future generations of foreign policy leaders.

Polina Beliakova studies international relations with a focus on civil-military relations, intrastate conflict, and international security with a regional interest in Russia, Ukraine, and Israel.

Charlotte Kiechel is a historian of 20th century Europe with a focus in Holocaust and genocide studies.

Erik Lin-Greenberg is a political scientist whose research and teaching examine how emerging military technology affects conflict dynamics and the use of force.

Caleb Pomeroy studies the psychology of power in international relations, and the effects of state power on human cognition, perception, and behavior.

Abby Post is a political scientist whose research focuses on the dynamics of international bargaining.